Taikisha has established the world's only facility that can produce crisphead lettuce in a large volume.

Farming, which supports our food and daily lives, today faces a multitude of problems, such as abnormal weather, natural disasters, the difficulties of stable supply, a declining and aging farming population, and safety issues. Plant factories that can grow food without regard to the season or climate and maintain stable production volumes and prices draw attention. In particular, plant factories are increasingly being chosen as suppliers of vegetables in the commercial sector, which requires a stable supply. This market promises to become more active in the future.

Taikisha's hydroponic plant factory use LEDs in place of the sun in air conditioned hermetically sealed spaces, with a hydroponics-based system growing leafy vegetables like lettuce in a culture solution that doesn't require soil. Compared to ordinary open-field cultivation, factories can provide a planned and stable supply all year round, and because of the hermetically sealed environment, the vegetables are fully pesticide-free, with virtually no risk of contamination by foreign objects. The viable bacteria count and risk of intrusion by insects are both extremely low, resulting in excellent vegetables that stay fresh for longer. In terms of waste, cultivation without soil means that most of the vegetables are edible, reducing food loss. 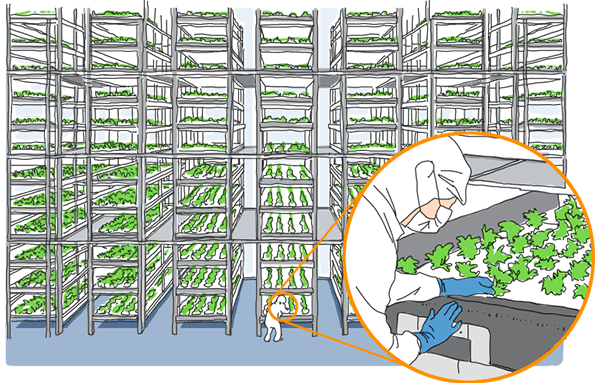 The cultivation areas of hydroponic plant factory solely using LED have sealed spaces with high ceilings, which meant that, with the previous equipment, the temperature was different between the top and bottom of the space, impacting the growth of plants and reducing yield.

However, Taikisha succeeded in achieving higher yields by leveraging its technology refined for industrial HVAC to keep temperature even throughout the space.

In addition to the above, as global warming causes more droughts and flooding, reduces farm yields and raises concerns about the impact on stable food supplies, vegetable production in factories will be an effective means of adapting to alleviate or avoid the impacts of global warming.